MY CART
You have no items in your cart.
Loading...

SKY HEART - MADE WITH LOVE
MEDIA
OTHERS

Do you need a world-class training device? SkyArt offers customized solutions at an incredible value. After one consultation with SkyArt’s expert team of engineers, you will on the way to receiving the perfect training device for your organisation.

SkyArt trainers are built to exceed your expectations and entail a variety of customizable features. No two custom trainers are the same, as each one is built, laid out, and configured to the customer’s exact needs while maintaining aviation safety guidelines. SkyArt is the proud manufacturer of a Boeing 777 mock-up cabin built to prepare Kazakhstan Border Guard Service cadets to perform their duties. This project was funded by the US Department of State and was completed in under 7 months from consultation to handover. The B777 cabin simulator is equipped with situation-appropriate cabin lighting, a live and recorded public announcement system, a fully functional emergency power shut-off button, and original cabin furnishings identical to that of a legitimate aircraft such as storage cabinets, lavatories, and cabin attendant stations. Once inside the simulator, cadets enter a forced state of suspended disbelief, as SkyArt’s custom trainers are identical replicas of the parent aircraft. 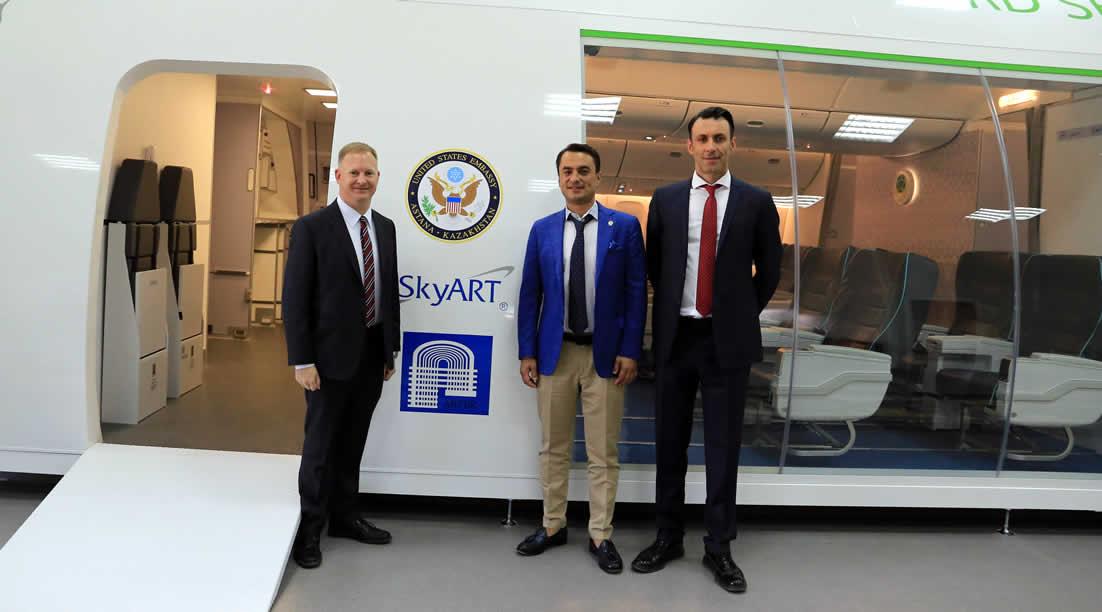 A Statement from Our Customer

“I want to express my sincere appreciation for the excellent work done by SkyArt to complete the wide-body aircraft training cabin at the Practical Interdiction Training Territory (PITT) at the Border Guard Service Academy in Almaty, Kazakhstan. The successful result of the project speaks for itself, and both my Export Control and Border Security (EXBS) programs and the Border Guard Service (BGS) of Kazakhstan are extremely pleased with the final product.”

The Custom Trainer SkyArt manufactured for BE Aerospace (currently Rockwell Collins) in Kilkeel, Ireland is a prime example of premium work in this segment of the industry. Using a SkyArt custom-built aircraft cabin mockup, the staff of this major aircraft seat manufacturer can perform practice runs of seat installation in B777 and A330 cabins.

The custom mock-up SkyArt design features two sets of seat tracks compatible with both the B777 and A330 cabin layout and seat track designs, making the training device “hybrid”. Using a single trainer device, BE Aerospace is now able to bring in two unique varieties of aircraft seats through the door and install them on the relevant seal tracks. This has saved the customer both space and budget, as they can utilize just one of SkyArt’s state-of-the-art custom mock-ups.

This custom trainer was manufactured per client specifications at a 1:1 scale replica with non-flammable composite materials according to the aircraft manufacturer’s original blueprints. The bespoke metal frame is efficiently powder-coated for a long-lasting, sustainable economic life span. This is just one of the ways in which SkyArt offers tailor-made solutions to the most complex training needs.